If you are ready to take your Stingray to a level you’ve never seen before then it’s time to step up and get your Corvette a Titanium exhaust system by Akrapovic. Akrapovic has long been known in the European community as the go to source for the best sounding and best performing exhaust system on the market. Akrapovic designed and started to manufacture an exhaust system for the C6 Corvette back in 2009. The  reception was huge and they have been bringing joy to Corvette owners all over the world since then. Today we finally have the chance to get one of these amazing titanium exhaust systems for the C7 Corvette Stingray and Z06. 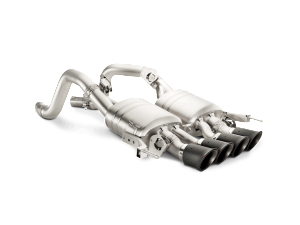 The C7 Corvette Akrapovic exhaust system is available in two ways, full system, called the Evolution and also the cat back, call the Slip-on. These are only available in Titanium.

Slip-On Line system is the first step in exhaust tuning. Crafted from high-grade titanium, which considerably reduces the weight in comparison to the stock system, it has been perfectly designed to fit directly onto the existing link pipes. The system increases power, provides better throttle response, and improves torque, and also conjures up an amazing sound from the naturally-aspirated V8 engine. The Slip-On Line system has four valves, designed for the first pair to operate in four- cylinder mode and the second set to come into action according to the driver’s specifications. The system is developed to be compatible with the car’s drive mode selector, and Akrapovič engineers have developed an electronic device to drive the exhaust valves for each mode—Weather, Eco, Tour, Sport, and Track—giving the driver an even greater opportunity to enjoy the sound of the Akrapovič Slip-On Line across the whole spectrum of the car’s performance. It’s topped off by four large-diameter carbon fibre tailpipes with titanium inners, to make the Slip-On clearly recognizable as an exhaust that means business. 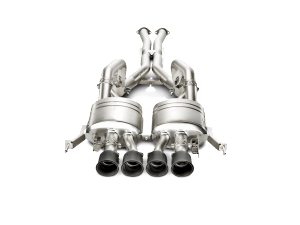 The Akrapovic Evolution Line system takes exhaust tuning to the next level. Featuring mufflers and link-pipes made from high-grade titanium to dramatically reduce the overall weight, the system provides more power, lowers back pressure, enhances throttle response, and increases torque. With four valves, the first pair operates in four-cylinder mode and the second set comes into action following the driver’s specifications. With an electronic device developed by Akrapovic engineers for the five standard GM modes—Weather, Eco, Tour, Sport, and Track—the system is perfectly matched to operate with the car’s drive mode selector. This produces an even greater range of options for the driver to fully experience the amazing sound of the car. The Evolution Line system, with a new X-pipe, provides even greater performance compared to the Slip-On Line system, and provides a pure race-note soundtrack for this stunning engine, with the enhanced sound characteristics of the V8 configuration and without any drone—just pure enjoyment. Four large-diameter carbon fibre tailpipes with titanium inners complete the appearance of the Evolution Line perfectly, making it stand out as something special.

We’ve found a few website that carry these exhaust systems. The great folks at PFYC.com have them available, RPI Designs and also Southern Car Parts. 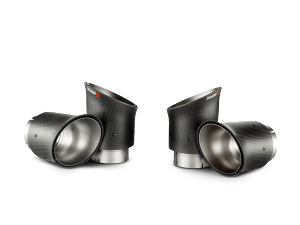